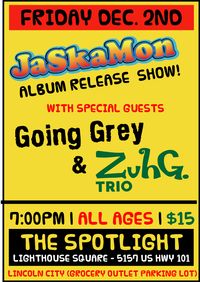 Opening up the night at the JASKAMON CD release show!

Also exciting stuff!! Dylan played guitar on several tracks on this JASKAMON album Bryan did the album artwork for the new JASKAMON album *and... we are backing up JASKAMON as band members for this show. Bryan on bass, Dylan on guitar, and Andre on drums..

Hope you can make it! Tickets available at ZUHG LIFE SURF SHOP